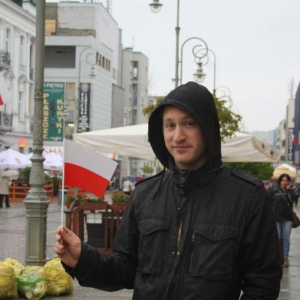 My name is Christopher Lash. I started blogging about how Poland experienced Euro 2012 and now I write, tweet and podcast about the wacky world of Polish football (WWOPF). If this predictor leaves you gagging for more you can also find me on Facebook and on twitter at @rightbankwarsaw. You can also contact me via email at: rightbankwarsaw@gmail.com.

But that’s not all, I also record the rightbankwarsaw podcast – a semi-regular pod about Polish football. My work has appeared in the Blizzard, its Polish equivalent Kopalnia and a whole host of other publications. I have appeared on Talksport 2 and the Guardian Football Weekly Podcast to talk about Polish football.